Today in 1974… Schmidt goes deep for a single 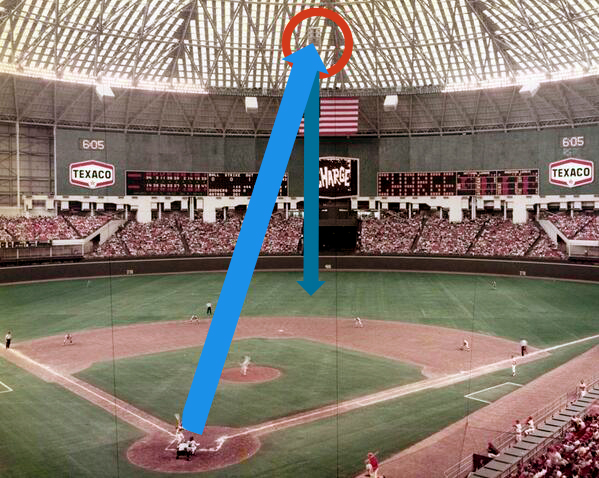 On the night of June 10, 1974, in Houston, Schmidt gave the baseball world a taste of his hall of fame power in the first inning against the Astros’ Claude Osteen. With runners on first and second, Schmidt drove a ball off a public-address speaker hanging from the Astrodome roof in center field. The speaker was 117 feet up and 300 feet from home plate — and cost Schmidt a sure home run by deflecting the ball. It fell for a single, moving Dave Cash to third and Larry Bowa to second.

Bill Robinson followed with a double, scoring Cash and Bowa and giving the Phillies all the runs they would need in a 12-0 victory. Schmidt added two more hits and three RBIs later in the game.

After the game Schmidt professed frustration at the loss of a home run. “There’s no doubt it would have been a home run,” he reasoned, “and I said to myself, ‘That damn speaker cost me a homer.’ If for some reason late in the season I’m one short [of the home run lead], I’ll think back about it.”

He needn’t have worried. Schmidt ended the season with a major-league-leading 36 home runs. It was the first of six times he led the major leagues in homers and the first of eight NL home-run titles.

So how far would Schmidt’s ball have gone had it not hit the speaker 117 feet above the playing field? Some days after the game, a reporter asked Dr. Martin Wright, head of the University of Houston’s department of mathematics, how far he estimated the ball would have traveled unimpeded. Wright replied: “The ball probably reached its maximum height 50 feet before it hit the speaker, or 250 feet from home plate. That would make it travel about 500 feet.